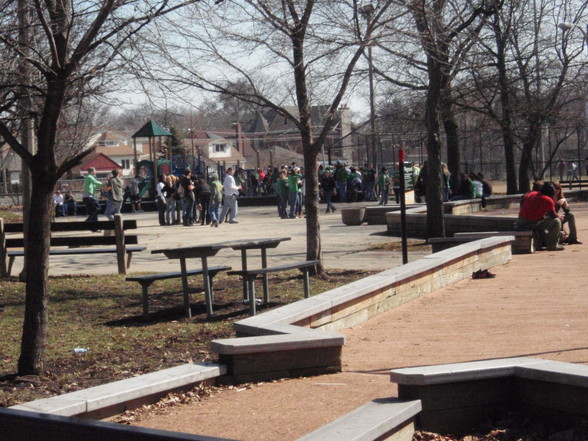 Who said the Midwest was flat all over? Not any one from Beverly. The Chicago nabe sits at the highest elevation point in the city, and really has actual hills (similar to the LA nabe of the same name). While it lies on Chicago’s most southern and western borderlines, its residents can still easily reach the city’s center via public transit or car. Quiet and community-oriented, Beverly loves its tradition, its trees, and its pubs. Beverly's homes are monuments of the past—five are Chi-town landmarks and the vast majority were built between the mid-1800’s and mid-1900’s.

Beverly was built on tradition, culture and family. Home to the former South Side Irish Parade down Western Avenue, it was a beacon for binge drinking and the notorious ability to overlook underage usage. Supposedly, now that the parade has been canceled things have calmed down. But I’m sure the neighborhood kids are still meeting for fights at local parks. Granted this is very “high school” on the south side. Grade school is mostly about dipping your toe in the pool of experimentation. And after a few years in college or out in the real world most hardcore south siders tend to get over themselves, and their hood, and are more concerned with just having a good time.
Many of the people that grew up in Beverly end up staying or moving back to raise their families. It’s a good place to have a few kids. Beverly is home to Clissold and Sutherland, two top rated public grade schools in Chicago. If private is more appealing there are several private Catholic schools as well as Morgan Park Academy (MPA) for the academically ambitious child. The most common high schools residents attend are mostly Catholic; Brother Rice, Mother McAuley, St. Rita, Marist, St. Ignatious, and MPA goes to grade 12.
As this nabe is highly family oriented, singles and young adults have to make their own fun. Western Avenue’s bar scene is extensive yet has a serious lack of diversity. They’re almost all Pubs or sports bars. Each one is a little different, but that relies heavily on what kind of crowd is taking over the bar that night. For a change of scene, locals can hop on the Metra fairly easily for a night further north. But Metra times are inconvenient for long nights. The last trains that come home from the loop leave LaSalle Street Station at 12:30 AM.
Despite the inconvenience when it comes to transportation, Beverly is actually a pretty nice place to live. If you’re ever walking through the neighborhood you’ll notice just how beautiful it is. The houses are amazing, big with a different look to each. They’re tall trees everywhere. Granted this puts a damper on the cicada summers, but what’s one summer out of 17. Another thing is cost. Beverly is on the pricier side compared to other south side nabes, like Mt. Greenwood. But you’re if you can afford it, you’re getting a beautiful home, good schools and some pretty awesome local restaurants. Calabria’s and Fontano’s. Yum.

Expensive homes, golf, and frat stars way past their prime

People here often call it Beverly Hills, and it’s true – it’s just about the only place in Chicago with hills. But since some 90’s show popularizing the Beverly Hills in LA I guess people have started calling this neighborhood just “Beverly”.

Either way, this is a very convenient area to commute to the financial institutions (Rock Island line and by car), so as you can imagine a lot of houses have a yard, a Jeep or Lexus, and an loud Irish father.

Catholic churches and Irish pubs are found all around the neighborhood, and it hosts a huge Irish St. Patrick’s Day Parade every year. This area is a classic Irish-Catholic breeding ground, with all-boys and all-girls schools (and great public schools), but it’s become much more mixed since the 60’s and 70’s, unlike the neighboring Mount Greenwood.

It’s far from Chicago’s center, which means even though it is much more expensive than the nabes around it, Beverly isn’t incredibly expensive compared to living in the middle of the city. It’s on the rich side, and great for families, so if that is what you’re looking for, Beverly is a good place.

The farmers market is great! everyone is very friendly and down to earth. great for families. i spend a lot of time there and we are buying a home there.

A bit of a marvel on the waaaaaaaay south side. The gorgeous historical houses and trees are a breath of fresh air from the typical Chicago nabes I hang out in. Affluent, multi-generational families, cops and firefighters typify this nabe.

Beverly: Blooming with Tradition Outside the City

Beverly’s charming pubs and prevailing sense of Catholic community make this neighborhood seem ideal for a colorful sit-com about relatively quiet Chicago living. Although it’s quite far away from Chicago central, and definitely mostly residential, Beverly has enough character to prevent it from feeling like bland, suburban living. Beverly’s on the slightly more affluent side of ‘middle class’ than some of its surrounding neighborhoods—specifically Washington Heights, which Beverly was a part of back in the day. This neighborhood seems like the right spot for Chicagoans that appreciate a good beer and want to raise a traditional famil
Vickie W.