beaches near boston ma marblehead massachusetts the sea which had once been their livelihood is now their playground.

Marblehead, a Massachusetts town 18 miles north of Boston, has been shaped by its relationship with the Atlantic Ocean from its founding in the seventeenth century up to this very day. The town is a peninsula jutting out into Massachusetts Bay with a sandbar extending out from the peninsula out to a neck. The peninsula and the neck encircle an area of water known as Marblehead Harbor.

The land is rocky and hilly. One shopping area is built around a large granite ledge which must have seemed too beautiful to blast away. Marblehead got its name from a case of mistaken identity. The early settlers thought the many granite ledges were marble.

A day trip to Marblehead in early spring might mean winter coats and hats like it did for us this March. The sun was brilliant, but the wind was brisk. Summer in Marblehead is hot, but a spring visit also meant easy driving and parking on the narrow streets in the historic area close to the sea. And the “townies” had plenty of time to chat with us.

While he made our lunch sandwiches, Paul, the chef/proprietor of Foodie's Feast, told us how he'd bought the place and moved here from the city 6 years ago. Foodie's is on Washington Street in the historic “old town”, nestled in among boutiques and shops. My lunch was one of the freshest and tastiest that I've ever had in a café, especially the lobster bisque. Most likely the lobster came off the boat of a local lobsterman.

We shared lobster bisque reviews with Betsy, the volunteer at the Marblehead Arts Association during our visit to look over the entries in the 2nd Annual Sculpture and Photography Contest. Marblehead residents and visitors love the arts, and the Arts Association is housed in the King Hooper Mansion, one of nearly 300 houses which have survived from the Colonial, pre-Revolutionary War period. Betsy said her favorite bisque came from The Landing, but when we told her about Foodie's she called over to order some delivered so she could compare.

Marblehead fishermen and lobstermen still make a living from their catches in the Atlantic, but it's not the wildly prosperous industry it was before the Revolutionary War when men became rich catching and exporting dried cod. In 1846, a storm sank half the fishing fleet and 65 men and boys were drowned. The fishing industry began to decline as people lost their heart for the sea and turned to shoemaking.

Walking along Front Street with the ocean nearly always in view, I could smell the sea salt on the wind. There were a few fishing boats in the harbor. But the pleasure yachts were dry docked and wrapped in white waiting for their summer season. This is what the sea means to Marblehead now. In the late 1800's two fires destroyed the shoemaking industry. The destiny of the town would again be linked to the ocean as men of wealth began to bring their yachts to the wonderful harbor.

In the summer, Marblehead Harbor is dotted with yachts. Sailing enthusiasts will find boat makers and sellers, six yacht clubs, and numerous races including the yearly race to Nova Scotia. Marblehead is often called the “yachting capital of America”, a playground of blue sea.

The nature of the appeal from the sea may have changed from 1700 to now, but appeal she certainly has. The sea has fed the folks of Marblehead, lined their pockets, satisfied their love of sailing, and enticed those of us who love the sea to come spend a few hours under her spell in this delightful historic ocean town. 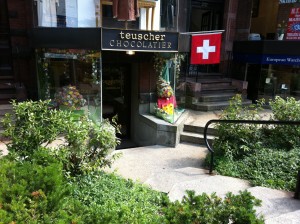