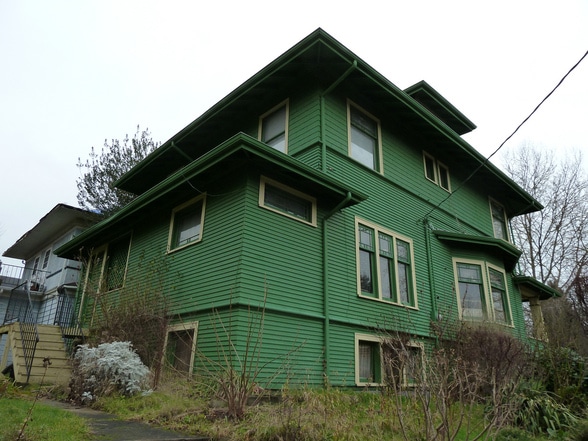 I am a globalization business consultant with decent income, I live in a custom Green home (infill) designed by a well known architect in the area (B9 Architects) and spend a good amount of my time traveling abroad. Across the street from me is a retired social worker, African American and in her early 60’s, she’s been in the neighborhood for over 30 years (before that Belize, where she’s from) and is a fantastic neighbor, always looking out and keeping tabs on the happenings on the block. Next door I have a young hipster couple with a 2 year old baby girl, he works at Corbis images and she’s a nurse practitioner. They live in a 100 year old red farm house and have modern, sparse furnishings and regularly come over with cookies or other goodness. Next to them we have a couple in their late 50’s, he works in state government (spends M-F in Olympia) and she’s about to retire from her city job. They collect art and have 2 Chihuly originals as well as other phenomenal pieces. Next to them is the well known local artist, Tim Marsden, and his wife and brilliant daughter.

All of the above come to my twice-a-year parties religiously and they always bring treats and stay late, mingling with my eclectic group of friends who include artists, corporate types, and NGO/activitst type people from all over the world. Behind me I have an old folks home, who are also wonderful neighbors and super conscientious. Down the street I have an Ethiopian Church, with occasionally means the streets are filled and hard to find parking, but the rest of the time it’s super easy to find parking anywhere.

2 blocks away is the new NW African American Museum and the Jimmy Hendrix park, and adjacent to that are 4+ public tennis courts (Sam Smith Park, Judkins Park), soccer fields, bike trails that connect to the Burke Gilman and the tunnel that takes you to Lake Washington and the beaches by My Baker in minutes.

This neighborhood was getting increasingly more expensive quick, and the result is a lot of new construction and remodels, mixed with old craftsman homes and other blue collar cottages…a very eccentric architectural mix. I can’t say enough about this neighborhood, the people are amazing, the look and visual feel are unlike any other part of Seattle (esp. the diversity) and it’s central location make it so that you can get to the East Side (heaven forbid life requires that of you) in less than 10 minutes by crossing I-90.

This is an absolutely gorgeous part of Seattle (with a rocky history, so be sure whatever you read is current, this was a sketchy part of town 5-10 years ago), I can’t imagine living anywhere else in the city. There aren’t 30 restaurants nearby like Belltown, but if you want to live in a real neighborhood but still be downtown, there’s no place else that gives you both…plus so much more.

You hear a lot of buzz words when you’re neighborhood shopping or just exploring a city. You hear them so much that you start to glaze over them. Diverse, okay, okay. Hip, yeah, yeah. Got it. The Central District really embodies these two adjectives though and can’t be described in any other way.

Though I grew up in Capitol Hill, I spent many of my formative schooling years in the CD, going three years at Washington Middle School and the next four at Garfield High. The draw of these schools was, and continues to be, their legacies of academic excellence and emphasis on accelerated programs, and they remain the ‘diverse’ alternatives to the white-as-white-can-be Eckstein and Roosevelt north of the U-district. The hard part about going to these schools though, was that the diversity the schools proclaimed was really a thinly-veiled internal segregation, and racial tensions were probably higher at Washington and Garfield than anywhere else in the city.

Since I graduated, these tensions have started to spread beyond the walls of the schools to the make-up of the neighborhood itself. Historically an African-American neighborhood (Seattle jazz music grew up on Jackson), the last 5 years have been a period of increasing gentrification for the CD, with rents rising steadily and poorer families being pushed farther and farther south of Jackson.

Despite the troubling and problematic issues surrounding the area, the bright side of gentrification has been, as it always is, growth and beautification. The three scary-ass condemned houses that stood untouched for years except by rats and squatters on 23rd and Yesler are now luscious duplexes; Garfield’s remodel, completed in ‘08, brought the looming modern facade of the Quincy Jones performing arts center and the new Teen Life Center; and the list goes on. The rent is considerably cheaper than in Capitol Hill, and as a result the CD has been trending towards becoming a new hipster oasis (everyone seemed to realize at once, a few years ago, that Cap Hill and downtown are only 5 minutes away by bike). White people feel safer, hipsters feel cooler, and many people feel hopeful for the neighborhood’s future. The Stumptown on 12th and Madison feels almost like a hipster settlement, reaching into the CD the foster southward expansion.

Though the CD and the political and social issues that surround it often feel inextricable from one another, the truth is that it is a pretty good place to live in Seattle, especially as a young person without the trust-fund-esque cash flow of many Cap Hillers. The food choices are really diverse, affordable, and exceptional: Cherry St. sports two excellent Ethiopian restaurants across the street from one another, with Catfish Corner, named after its specialty dish, rounding off the street; the legendary Ezell’s fried chicken is a daily favorite for a huge chunk of the Garfield High student population (myself, formerly, included); and Saigon Deli’s $2.50 Vietnamese sandwiches on Jackson and Rainier might be the best in the city. Shopping needs (clothes, not groceries) will probably need to be fulfilled in Capitol Hill, but the commute is so easy that its not really a detriment. The greenery and park life of Leschi are also just a few blocks east, as is Lake Washington. And the super-convenient 48 bus will take you all the way through the U-district and beyond. It’s tempting to say that the CD’s easy access to other ’hoods in Seattle is its greatest attribute, but the neighborhood is becoming increasingly appealing to middle-class whities in its own right – for better, or for worse.