Forest Glen (home to the pocket nabes ofSauganash, Edgebrook, and Wildwood) is commonly referred to as ‘Chicago’s Finest Community’—a nabe many upper-level public servants call home. A decent commute from the city center, Forest Glen is one of Chicago’s most northerly nabes. So what’s the allure? Well, they weren’t lying when they named it Forest Glen. Part of this nabe’s borderlines are made up of lush forest preserves, including a much more nature-friendly portion of the Chicago River. Beautiful homes, incredibly well-kept lawns (especially on this nabe’s multiple golf courses), and friendly neighbors add to Forest Glen’s appeal. A true escape from urbanism, Forest Glen also gets boasting rights on being one of the few Chicago nabes whose streets stray from the grid system.

Forest Glen, the nabe of nabes in Chicago… If you have about a billion dollars just lying around. Forest Glen is known in a slightly arrogant tone as “Chicago’s Finest Community.” And yes, Forest Glen is quite fine, in the way that a two hundred dollar bottle of bordeaux is fine, excessively upper class and delicious, if a bit conceited and pompous about its real value.

This nabe is technically part of Chicago, it is one of the 77 defined community areas, and one of the oldest nabes in the city, but it feels vastly more suburban than most of Chicago. There are more golf courses than people, the houses are large enough to hold a small army, or a billion one dollar bills, and the trees are older than the oldest residents. It’s quiet and gorgeous, and super exclusive.

Of note on the wonderful front is the amount of parades and community-wide block parties that take place during the summer. These events lend Forest Glen an incredible sense of community that is one of the reasons residents of the nabe tend to stay put for a very long time, which also makes finding a house in the area for sale a tad on the difficult side.

…In the sense that most of its streets run diagonally. This may not sound like a big deal, but to a Chicagoan it can be very confusing, with all of the streets beginning with “N.” (N. Hiawatha Ave. perpendicular to N. Jean Ave. perpendicular to N. Ionia Ave., etc.) On a map, Forest Glen rests gently atop part of the Cook County Forest Preserve, which is big enough to get lost in (believe me). Some of the houses in Forest Glen may be big enough to get lost in, too, since many of Chicago’s elite live in this neighborhood. I still have yet to receive an invite. 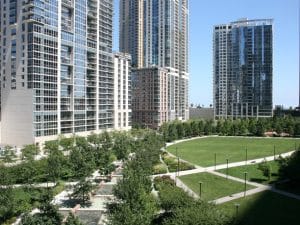 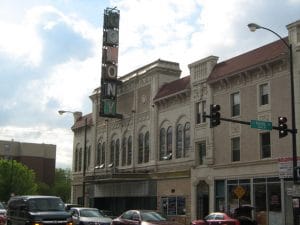