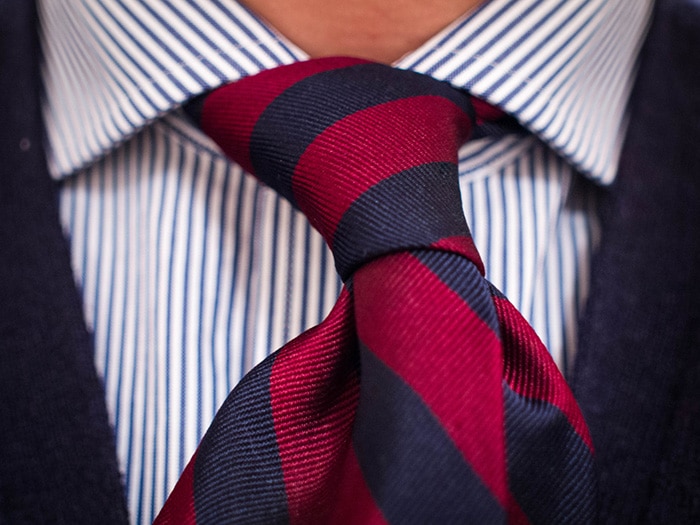 Striped ties were originally developed as a part of the British Military uniform, they would signify the different regiments. These large solid striped ties are still the most common type of striped ties and all other forms have developed from them. 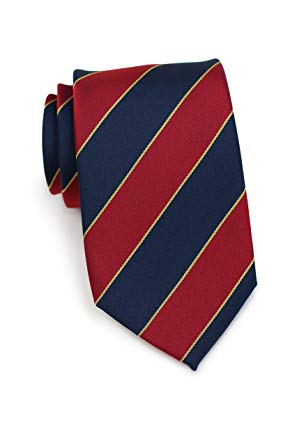 British Regimental striped ties are often considered as the original type of striped tie and have been around for many year. They consist of stripes going from your left shoulder down towards your right waist.

The stripes are thick but there are very few on the tie. This type of tie is a formal striped tie and is great for work, interviews and even more formal events.

American Regimental striped ties are based upon the original British version. They were popularized in the early 20th century by Brooks Brothers and have a set of three small stripes closely together, forming a single stripe. These stripes go from the right shoulder down to your left waist and have large breaks between lines, as with the British Regimental ties.

This type of tie is very similar to the British type and therefore should be used in similar circumstances. It’s a formal tie that should be worn to professional events. 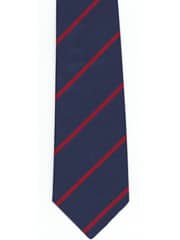 University Striped Ties are from British universities that each have their own ties. These ties consist of alternating large stripes that go from your right shoulder to your left waist. Traditionally, every other stripe would be navy, but in recent years there have been some more unique interpretations.

These ties are designed to show partnership at certain universities, societies or teams, so, if you’re in the UK you might want to check where you’re going to see if the tie is appropriate. You never want to suggest you’re part of an organization that you’re not.

The University striped tie is a more casual from of the regimental tie, although it can still be used in formal settings, it’s better with a smart casual outfit that would be worn to boat races or summer parties.

Skinny ties don’t necessarily make the pattern any different, but because the tie is such a different width it can greatly affect the way that the pattern sits and how it looks against your shirt. Skinny ties often change the pattern because of this and make the stripes much closer together, in general, this makes the tie less professional and more suitable for an informal event.

How to Wear Striped Ties

Where to wear striped ties

Striped ties are versatile because they are exciting and interesting, but can also be used in formal settings. However, it’s important to know which type of striped tie to wear in different circumstances.

If you’re going to be at a formal venue where you’re expecting to act professionally then you’ll want to consider the British or American regimental ties. These are thick, solid and classic ties that are common in workplaces and rare in informal venues.

On the other hand, a University style tie or skinny tie is far better at a casual venue where you can be looser with your dress code and more experimental with your colors and fit.

They look best with plain shirts

Striped ties, by nature, are going to be complex and include a range of colors. Most are generally two or three-tones and this means you need to be careful about the types of shirt that you wear them with.

By wearing a complex tie you’ll often need to pick a plain or solid colored shirt to wear it with. You’ll often find that most Regimental style ties have a white or blue stripe and in this case you can very easily match your shirt to the color of the stripe. British Regimental ties often look fantastic with a white dress shirt and a darker jacket. 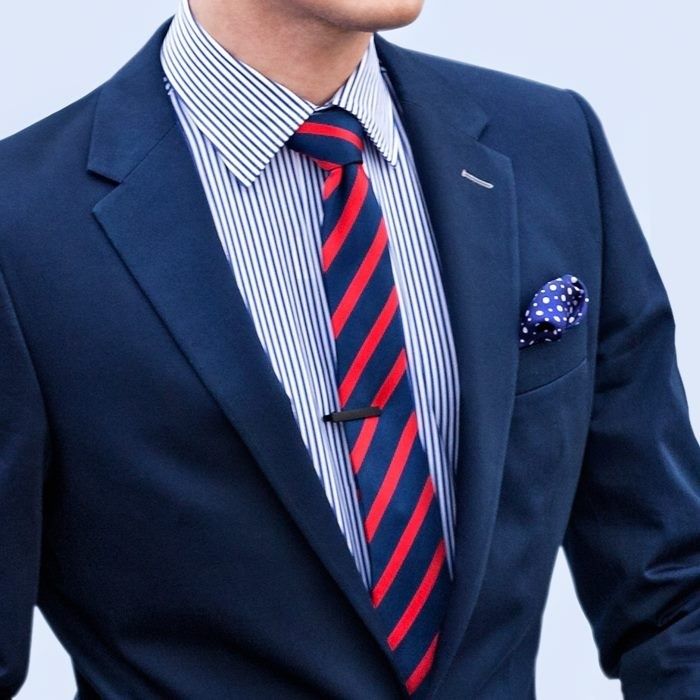 If you do choose to wear a patterned shirt with your striped tie then you need to be much more careful. The first rule is to vary the pattern sizes. If you’re wearing a Regimental tie, the pattern is very spread out and so you’ll want to wear a shirt with a small pattern like a small check or a thin blue and white striped shirt.

However, with skinny ties you’ll want to wear a larger pattern or preferably, no pattern at all. The key is to prevent the eye from getting confused by the similar sized patterns.

When you’re choosing to wear a striped tie and often with a patterned shirt, it’s important you’re wearing a solid suit. A complex suit adds far too much to the mix and makes it look like an odd combination of ill-fitting pieces.

Choosing something like a thick grey wool is an excellent choice or a very dark navy. The key is to keep the persons focus on the interesting tie that you have and you can do this by making the suit act as a border to the picture, you want to keep the border boring and plain so the focus is on the stripes.

When you’re picking out a striped tie one of the most important considerations will be the color of the tie and how that will fit with the shirts and suits that you already own. In our opinion, the best striped ties only consist of two alternating colors and possibly a thin border color around the stripe.