Named after the prominent Real Good Construction Company, Rego Park’s long time residences make it an incredibly diverse and close-knit community. The restaurants are friendly, your neighbors say hello and you might be greeted with a smile and a request to join one of the many active community groups, including the environmentalist-based Rego Park Green Alliance.

Rego Park is a fine place to live if you are trying to look for a more traditional yet convenient place to raise a family. It is a mostly quiet area, consisting of mainly houses with a few apartments here and there. The major thoroughfare of the neighborhood is 63rd Drive, featuring various shops, the library, one of the neighborhood’s elementary schools, and also the subway station. There are also six nearby malls for you to choose from, two of them inside the neighborhood, so shopping should not be a problem at all here.

The neighborhood is well-separated; the different types of buildings are clustered. You have areas of just town houses, apartment buildings, stores are in one area, and the larger single-houses are in their own area as well.

This is a convenient place yet far away enough from the city for those who don’t want to be in the city all the time. You do not have to go far for shopping; you have many grocery stores on 63rd Drive, the malls and other stores for clothes and electronics, and if the stores here don’t meet your needs you can head over to nearby Elmhurst or Flushing, and the city isn’t that far away either.

Transportation is adequate here, you have the M and R trains stopping here (E during overnight hours) along with various buses. Getting to the City by subway will take about half an hour, or if you like buses the Q60 can take you out to 2nd Ave by the 59th Street bridge in about an hour. Driving to the City from here is extremely quick, 10-20 minutes on a good day will take you out.

The people here are mainly people who have families with children and also elderly people who have lived here for many many years. It is a mostly middle-class neighborhood, and mainly white people (many Russian, and it shows) live here along with some Chinese and Spanish. The businesses in the neighborhood reflect this.

Since this is a family-oriented place, you can expect little night-life here. The streets are quiet and empty during the overnight hours, and everyone is tucked away in bed. Stores are all closed except for a few; not the place to be if you like going out at night.

All in all, this is a fine place to raise a family, mostly people move here when they already have children, it’s convenient, quiet, safe, friendly, not a bad place at all.Bill

Rego Park is a pretty big area, not just the part around the 63rd Drive subway station. It has lots of small house and apartment buildings, many of which look so much alike you can’t tell where you are. Traffic is bad, and so is parking. One hears a profusion of foreign languages. Many of the American residents are senior citizens, but perhaps I shouldn’t generalize. There is a huge shopping mall (Sears, Marshall’s) by the LIE and Queens Boulevard/63rd Drive that is only getting about five or ten times huger. That will only multiply the inundantion of shoppers and all their cars and hence multiply the already heavy parking problems, as happened with the Queens Mall in neighboring Elmhurst. If the new mall has tons of FREE parking maybe the parking problem can be averted, but not the traffic.

Speaking of traffic, I notice that people hang out right in the middle of the street talking, as if there aren’t any cars trying to get through. (I encountered this at night,) This must be an immigrant group from a country in the old Soviet bloc where there were so few cars humans standing in the street had the right of way.

Because of the subway stop and certain buses it is possible to live here without a car, and it probably isn’t a bad place to live if you work in midtown Manhattan. But I don’t think of Rego Park as a place I’d want to live because it is so congested. The dividing line between Rego Park and Forest Hills is a blurry one.

Rego Park is a great place to eat out, which hasn’t been discovered by the trendy people (who have already discovered and told their friends about Jackson Heights, Woodside, and probably Flushing). Inexpensive, exotic, and fun. You can be transported to some very different land each night. I also love shopping on 108th Street. In particular I buy freshly roasted and ground coffee at Carmel.

There are plenty of options for daytime and nighttime activities for all interests. An interesting example of the weird juxtaposition of thing is that Wiggles, a famous (or infamous) strip club, is a stone’s throw from the Rego Park Jewish Center. Knish Nosh, one of the best and most famous knish joints in the city, is here. So is a Starbucks and an adult video store. There is a special park for dogs and people walking them but I don’t know of any other parks, That’s a downside.

One thing you really have to be careful about is Queens Boulevard, also known as the Boulevard of Death, a nickname that very much applies to the Rego Park portion of the street.

If you don’t like being in a place surrounded by lots of immigrants from all over the world whose languages you can’t even identify much less understand, you will not feel comfortable here. But in that case, what are you doing in Queens? 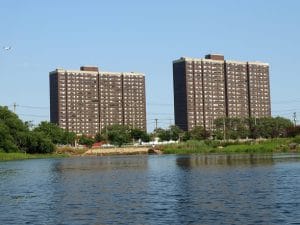 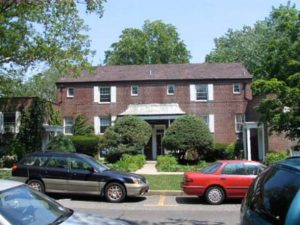 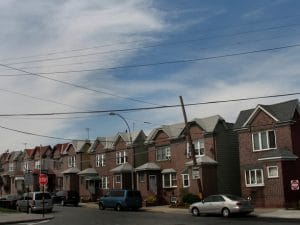