Rising from the warm shores of the Persian Gulf and the shifting sands of the Arabian Desert,is the city of Dubai, the largest emirate in the United Arab Emirates.

For two centuries,Dubai was not much more than a tiny trading port on the banks of Dubai Creek. But in less than a single generation, the city has become a destination once relegated to the imaginings of science fiction writers. A place that defies its extreme environment, and redefines everything we think we know

Despite appearances, however, the foundations for this glittering citadel are not built on sand, but on thousands of years of Arabic culture and tradition. Step through the veil of Islam at the Jumeirah Mosque, where non-Muslim visitors are invited to tour the beautiful interiors and take part in lively question and answer sessions.

Head to the historic Bastakia Quarter and visit the Sheikh Mohamed Centre for Cultural Understanding. Here you’ll experience local customs, Bedouin hospitality and enjoy home-cooked Emirati food. To learn more about local traditions, go shopping, the way Arab people have for centuries. Follow the scent of frankincense and herbs to the city’s spice market. Then, explore the hundreds stores in the gold souk, and discover why Dubai is known as “The City of Gold”.

To explore the souks of the 21st century, head to Dubai Mall, home to a staggering 1200 stores. Dubai Mall is also home to Kidzania, a miniature city complete with its own radio station, hospital and fire station

all run by children! But by far the mall’s biggest attraction is the Dubai Aquarium and Underwater Zoo. Take a walk through a watery world, filled with over thirty thousand creatures from the deep, including enormous rays and sharks. Once you’ve explored the depths of the seven seas, step outside, and look to the heavens. Rising over half a mile into the sky is the breathtaking centerpiece of Dubai,

The Burj Kalifa, the tallest structure ever built. Three times the height of the Eifel Tower and twice the size of the Empire State Building, the tip of this modern wonder can be seen from 60 miles away. Take a high-speed lift to the 124th floor observation deck, which gives expansive views of the city,…a city that seems to grow before the eyes. The Burj Kalifa is particularly beautiful at night, especially when viewed through Dubai Fountain’s dancing waters.

Everywhere you look in Dubai, you’ll come face to face with daring projects which almost defy belief. Enjoy a few Arabian Nights at Madinat Jumeirah, a five star resort styled upon a traditional Arabian town. Or sail into a sea of luxury at Burj Al Arab, a seven star hotel, whose graceful curves echo the traditional wooden vessels of the Gulf.

When temperatures climb, head to one of the city’s public beaches, like Mamzar Beach Park, or for a small fee, enjoy the luxurious amenities at one of the many private hotel beaches. Take the family to Wild Wadi World, and splash out on over thirty rides, themed around Arabian folk tales.

Take a high-speed ride with a difference, at Atlantis Dolphin Bay. Then discover even more marine creatures, at the Lost Chambers Aquarium. But if you really want to cool down, take the chairlift to the top of the indoor mountain at Ski Dubai.

This ski resort in the desert, features five ski runs, including the world’s first indoor black diamond slope. Ski Dubai is even home to troupe of snow penguins, which come out to play several times each day. Once you’ve perfected your turns on the snow, why not try a little sand boarding. Whether you come for a day or stay a few nights, a journey into the Arabian Desert is an experience no visitor should miss.

Take a camel trek, meet the wildlife, or just gaze out at the endless expanse of sands. This is a place so quiet,… you can hear your own heart beat. It’s when you’re out here, only an hour from the world’s tallest building, that you’ll truly appreciate just how miraculous Dubai is.

Expedia , How to change to your hotel booking

Expedia , How to select your seat preference 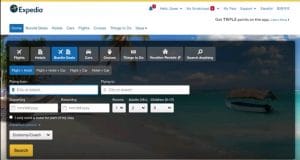 how to book a flight on expedia