With an abundance of schools, parks, churches, and a 50 year old Dick’s Drive-In, Crown Hill maintains a relaxed lifestyle sure to attract those looking to settle down. The neighborhood has a number of grocery stores, restaurants, auto-repair shops, and quick highway access to the city. The neighborhood has a diverse range of housing styles, with one exception: the tendency for lawns to reach the street — there are few sidewalks! It’s no matter though, as Crown Hill is a perfectly quiet and peaceful neighborhood, and besides, curbs are the new sidewalks. You heard it here first.

This is one of those nabes that’s like actually a neighborhood. They have neighborhood meetings, churches, restaurants, everything (okay everything except sidewalks.) It’s probably cause people—mostly middle-aged—move here and actually stay here. Why do they stay here?

It could be the view of the water and mountains. It could be the parks. Maybe it’s because there’s a neighborhood association that actually does stuff (like makes a website that not only has been updated since 1998 but gets updated regularly.) I don’t know, maybe they’re just Dick’s Drive-In fans; I mean, who isn’t in Seattle?

Whatever it is, people move here and settle down for a quieter but far from dull life and they stay here.

Quiet but not sleepy

Not a lot of options for young people

Crown Hill is a cute and quiet nabe located in northwest Seattle. This nabe is absolutely gorgeous, thickly lined with foliage and huge pine trees stretching as far as the eye can see. The center of Crown Hill is located appropriately on top of a hill which results in sloping residential streets and eye-popping views of Puget Sound and the Olympic Mountains. Multiple bus lines run directly through the center of the nabe, along Holman Road, which also serves as the commercial hub of Crown Hill. There are a decent number of restaurants located within the nabe proper, with many more options being available a quick walk, drive, or bus ride south.

Most of the housing in this nabe consists of single floor, single family housing hovering around the 2000 square feet mark. The average selling price of a house over the past year was around $450,000. Cheaper housing is abundant however, and much more expensive and elaborate housing can be procured as well.

The sense of community in this nabe is exceptionally strong, with a neighborhood association that regularly plans public events and sponsors a vast number of other activities for all ages and interests. The nabe even has its own newspaper.

According to the Crown Hill Neighborhood Association, they are attempting to improve the neighborhood by adding paved sidewalks and eliminating crime; however, it is still currently a messy clash of suburban ideals and industrial grit. The neighborhood consists of small, rather well kept family-sized houses and rundown apartment complexes whose inhabitants tend to ignore one another and harbor feelings of general distrust. Sidewalks are few, although the residential streets are wide enough to allow for pedestrian passage. The biggest clothing store is Value Village, which was recently re-located and decorated with a bright mural by the public artist who signs his work “Henry.” There are several grocery stores in the area, including a Grocery Outlet, a Safeway, and a large QFC. Public transportation is sparse, but because there is not much to do in Crown Hill and almost no reason to drive there unless you live there or are visiting friends, free parking is easy to find. By far the best aspect of Crown Hill is its large, lushly forested Carkeek Park, whose various trails lead down to a playground and a beach. 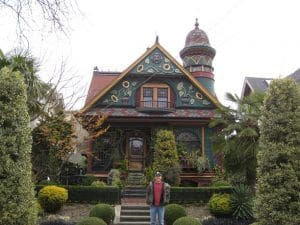 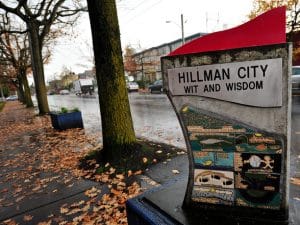 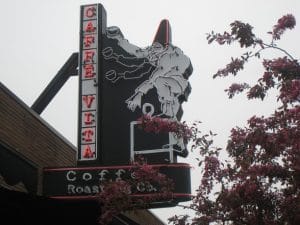