Midtown Terrace descends down the western slopes of Twin Peaks. Telling street names like Skyview and Cityview Ways hint at the stellar panoramic views this hilltop nabe holds. Single-family homes cling to the steep hills here, where a mid-century aesthetic is the architectural rule of thumb. Groves of eucalyptus shade the nabe, so densely in some parts that it can feel far from the city around it. Muni Metro buses service the community and Laguna Honda Hospital sits at its southwestern edge.

There are two things that stand out about Midtown Terrace: 1. the views, and 2. The home prices (they’re kinda high). Other than that, Midtown Terrace is not much different than your average, upper-middle class, urban residential nabe.

Midtown Terrace is a quiet, safe neighborhood but a little drab. The homes all look like one another, like the same person built every single one without changing the design. The streets can be really steep here, some with great views. You can accessTwin Peaks from the west through Midtown Terrace and avoid the traffic of the more conventional routes. 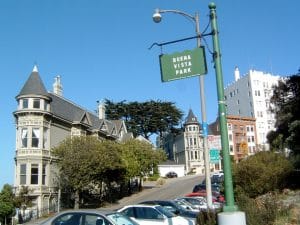 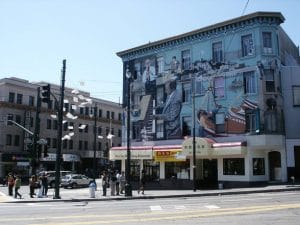