Half seedy and half chic, Polk Gulch is a distinct nabe that buzzes day and night. Mainly commercial in nature, the nabe is centered around Polk Street with its northern end being far more upscale than its southern reaches. Wine bars and boutiques share the blocks with dives and music venues, creating a colorful pocket nabe that typifies the diversity of San Francisco.

Why do people come to San Francisco? Answer, to see the Trannies run the Roost!
Polk Gulch or as the signs say “Polk Village” is a flat and fairly hill-less strip of San Francisco nestled between the Tenderloin and Pacific Heights. There are tons of bars down Polk street. This is one of the neighborhoods which stays awake after the Nor-Cal 10pm witching hour. This is where Suburban meets Urban. Coffee shops with free Wi-Fi abound in this neck of the woods. The freshest seafood in the city can be found at Swan Oyster Depot. Ex-Easterners(at least they look and sound like they’re from New York or Boston) shuck local oysters and serve up delicious salads piled high with just caught shrimp(the big ones) and fresh crab. The Clay Cinema off of California shows Indie and Foreign films daily. Out of the Closet Thrift store is always bustling. Don’t forget to get your Esoterica groove going at Fields Bookstore, a San Francisco Institution of all things Occult and Spiritual. And for that other cosmic groove check out “Good Vibrations” for all things Adult. As for the Trannies pick your spot and see why San Francisco is definitely one of the freakiest and coolest places on the planet for you to shake your groove thang

IMHO Favorite nabe in the city

Full disclosure, I live here. However the reason I live here is that I love this nabe and have always lived here and here abouts. I probably live in the southernmost part which some consider the grittiest. To be honest for me this is where all the life is. Fantastic bars everyone slightly different for your every mood. Fantastic food, all sorts of very good and cheap eats, and the poeple who work in the neighbourhood are great, I can go to a bar a restaurant and a corner store and everyone welcomes me by name and takes the trouble to chat about recent goings on.

I was visiting colleges in the area and decided to take a stroll on Polk with my family at the awkward hour of 7 pm. No one was really out to dinner, but the gay night club scene hadn’t quite started yet either. This led to a lot of families walking home from dinner, and a lot of trannys walking around getting ready to go out. Its kind of surreal but pretty cool. Its worth a visit, but maybe just not at 7 with my whole family…

Polk Gulch suffers from a touch of split personality disorder. Is it a charming nabe full of delicious restaurants and fun bars? Or is it a seedy nighttime limbo with….“themed” destinations? Well, really, it’s a little of both, and that’s okay with me.

Any type of food or bar is to be found here, full of interesting people

I wouldn’t want to station myself here permanently. It’s loud.

Polk Gulch is a great neighborhood… tranny, hookers aside. Actually, they add to the beauty and unique nature of the neighborhood. No kidding.

If you don’t visit the Polk Gulch area for something at least one a week, be it a yoga class, a bar, a restaurant, a cozy little shop that sells out of the way goods, or a to “visit” the tranny hookers… you’re not a true San Franciscan.

Polk Gulch is a hot destination. A pub crawl is an effortless feat here. Every type of bar is represented – the classy wine bar (Amelie), the it-bar of the moment (Kozy Kar), the sports bar (Greens), the tranny bar (Diva’s). Dining options are endless, pick your craving – Greek? Thai? Pho? Sushi? Crepes? Omelette at 2am? Donuts at 3am?

That being said, I wouldn’t want to live here – it’s kind of loud and you might not feel like you can get away. You can’t escape the chaos as you can in other neighborhoods. It’s buzzing all the time. Walking along Polk St south to north lends a slight bit of relief as Polk Gulch enters Russian Hill territory and trannies and hipsters morph into frat guys and the princesses who purposely ignore them.

However there are some hidden apartment gems which have great old character, mute the street noise and have sick rooftops, a rarity in SF. A few blocks along this strip can make a huge difference, see for yourself.

Polk Gulch is great neighborhood and depending what block of Polk Street you are on can drastically change your experience. Toward Russian Hill, Polk is very charming. Patisserie’s, boutique and high-end living cater to a completely different crowd than the southern end where seediness is king. All in all, it makes for a really interesting, exciting neighborhood that has a little something for everyone. An old favorite like the Swan Oyster Depot is not to be missed while newer hotspots like the Lush Lounge and the Hemlock Tavern pack in the crowds. 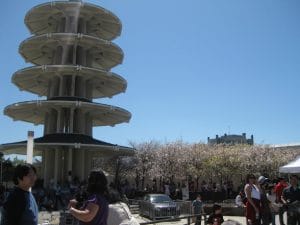 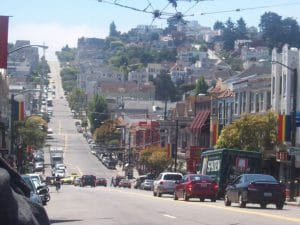 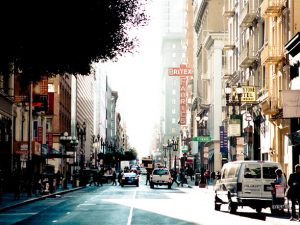 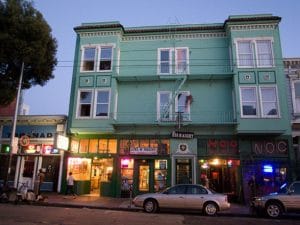