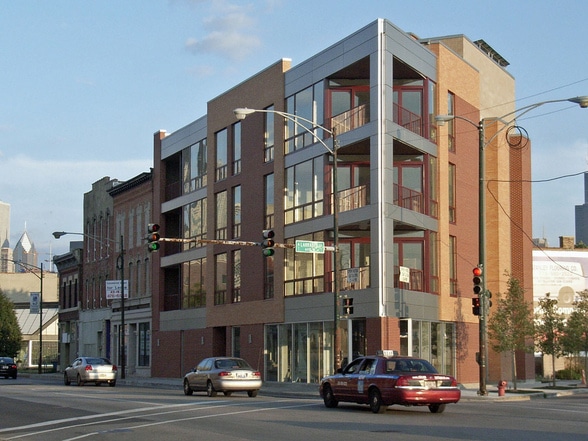 Clybourn Corridor is a unique community that rides on Lincoln Park’s western borderline. Residents here took the factory-to-loft movement to a new level by including churches and old schools in the mix as well. Needless to say, homes here come with great space, high ceilings, and a fine dose of character and history. Though it’s small, this nabe has proved to be one of the best: Chicagoans from all over come to Clybourn Corridor to shop for clothing and home decor. This nabe’s food scene merits bragging rights as well: not only is Clybourn Corridor home to many the fine dining establishment, it also boasts excellent grocery and wine stores, giving residents a great gastronomic experience whether they’re out on the town or cooking from home.

After living just up the street in the center of Lincoln Park and working in Clybourn Corridor, I can say that I’m glad this nabe isn’t a part of my daily commute anymore. Don’t get me wrong, I think that the old warehouses that have been converted into swanky, modern apartments are pretty cool. However, with the influx of stores such as Apple and an Ikea sized Whole Foods, the entirety of Clybourn feels suburban. Shopping is basically all one can do here, and the only reason people go here. I can’t hate on it too much, but nothing more substantial lies beneath the surface.

What have we done?

I always thought that this was called the Clybourn Industrial Corridor. This is colored by my hanging around the other side of the river on poor baby-brother Elston. The Clybourn corridor has almost completed its conversion from end to end from de-commissioned factories to trendy lofts. The Southern end boasts a particularly dense collection of middling chic big box retailers and dining chains with the Apple borg cube at its steel and glass center.
For some, this diagonal sliver on the Western border of Lincoln park is yuppie heaven. It’s clean as a whistle and has an El stop, a coveted Metra station and a bazillion buses running up and down North avenue. It’s the perfect place for young people to show off their money while they’ve got it. I think it’s one of the most dreadful places in Chicago, but don’t mind me. It isn’t my style.

Amongst the converted factories and warehouses, this area might have the most shopping outside of downtown, from the third largest Whole Foods in the world to a sparkling new Apple Store to Crate and Barrel. I shop here all the time, but I can’t help noticing that the stores are all big box, national chains, or both. This fact, along with the newness of the neighborhood, means that the Clybourn Corridor doesn’t have much character, at least not yet.

The Clybourn Corridor undoubtedly has a lot of great loft spaces if that’s your thing, but this neighborhood is a little too industrial, a little too car-dependent, and a little too commercial for my tastes.

While Clybourn Corridor is known for its distinctly urban housing (i.e. large warehouses and other buildings that have been converted into cool apartments), its famed shopping scene is distinctly suburban—a bit strip mallish. That being said, this area offers a load of convenience if you have a lot of stuff to buy: whole foods,crate and barrel, best buy, eastern mountain sports, jamba juice (for a shopping refresher) and a plethora of other big name stores are all located here. This is definitely a cool place to live—the big high ceiling condo conversions are hip, and the population exciting and ever-changing. If you plan to make this spot your home though, keep in mind the large commercial draw this area has for shoppers (it’ll typically be crowded during the day) and developers (you may be dealing with a decent amount of construction for the next few years)