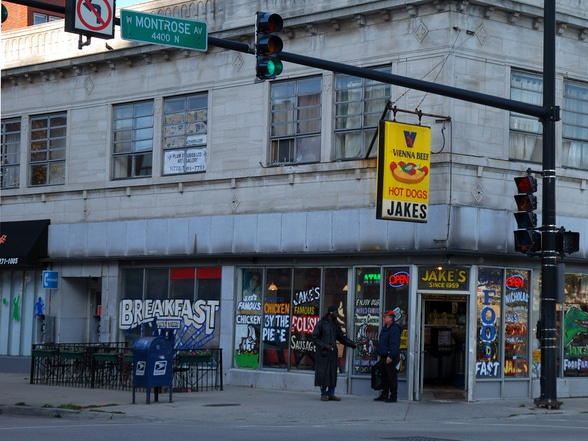 Not so long ago, Uptown was merely a cobwebbed reminder of Chicago’s affluent Gilded Age. Walk through Uptown now though, and you’ll see history repairing itself and once again thriving—this nabe’s in the midst of a glowing revival. The famous bars, theaters, and dance clubs that made this nabe Chicago’s top spot for noir entertainment are open for business (be sure to visit the Green Mill—Al Capone’s speakeasy jazz club, and the Aragon Ballroom). Uptown's majestic early 1900’s mansions are being restored as well. During the day, sightsee the streets, enjoy endless recreation options at Foster Beach, or indulge in some unique cuisine in Uptown’s mini-nabe, Argyle/New Chinatown. Be sure to keep an eye on Uptown; it’s re-defining modern Chicago.

Great Pho But Dicey at Night

The area to the near west of the Argyle Red Line stop, known as “Little Vietnam”, has great authentic Vietnamese food for next to nothing.
Directly across from the next stop, Lawrence, is the Aragon ballroom, a beautiful old venue from the Jazz Age that still hosts major concerts.

Other than that, there aren’t a whole lot of reasons to stroll through this neighborhood. Even though it has a rich history and has been gentrifying over the past decade, things remain sketchy. If you get off the Wilson stop and walk down Broadway, you will find nothing but “We Buy Gold” joints, McDonalds, and hair salons advertising dollar sign-shaped braids.

Go Uptown to Get Down

Riding my bike along Marine Drive from Lakeview to Uptown always incited a sigh of relief. Getting away from the constant overindulgent bar culture and noise, Uptown is like a subdued oasis. Though it may not be the most widely known or popular Chicago destination as it is on the north side and typically thought of as unsafe, it really comes alive during the few warm months Chicago gets a year. Starting from Wilson and heading up to Argyle, there’s a variety of people who reside here. Families getting out of the cookie cutter Lincoln Park area, college students, young couples, and an explosion of older individuals either in homes or on their own. Nonetheless, its an interesting place to spend a day or even a night.

If one were visiting Uptown, I think they would only see dirty streets, a few sparse bars and asian restaurants, and gaggles of people hanging out in storefronts. However, after working at the Chicago Religious Leadership Network just off of Lawrence and Sheridan for about a year, I found myself comfortable and almost a part time resident of the neighborhood, making acquaintances on the streets and venturing into all of the great youth organizations that have popped up to help kids explore their creative sides.

Go to Uptown for a downtown lifestyle.

If your sick of living a neighborhood that looks like it’s straight out of a fashion magazine, then Uptown has just what you need. It carries just enough grit to keep franchise coffee shops out and the neighborhood feel in. In fact, in spots, it puts the ‘hood back in neighborhood. But it does have everything that a cool area needs; from late bars, to great concert venues, old architecture, and cheap rent. The Red Line runs right through the heart of it, providing great transportation for anyone going north and south. Going west can get a little tricky, but when isn’t going west in Chicago a little tricky. The large Asian and African population have brought in some great ethnic restaurants that stay true to their own traditions. So check out Uptown if you’re looking to blaze new trails in a city that doesn’t have many left. Just don’t go walking down an alley while waving around $300 in small bills.

Make this place a nabe to visit

While it’s most definitely not Manhattan’s Uptown, this Uptown is by far chicago’s coolest up and coming nabe. A neighborhood that’ been relatively abandoned for quite some time is now rocketing back to life, its towering, beautifully crafted vintage architecture given a new gleam and shine. It’s like the neighborhood equivalent of an upscale resale clothing store + awesome Vietnamese and Thai food. I highly recommend taking a day to wander around this reviving spot, and if you’re interested in finding some new permanent surrounding, check out real estate around here—it may be a great investment.