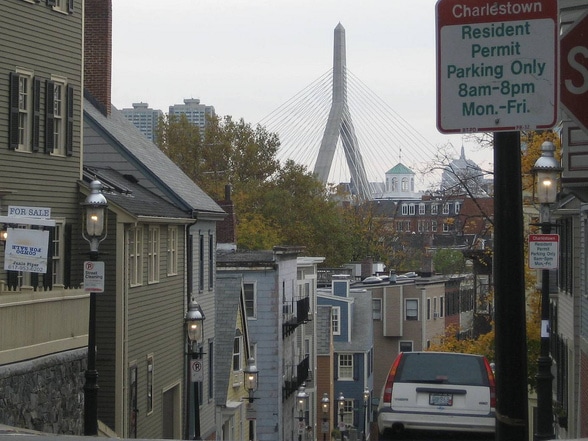 Across the Charles River from the North End of Boston sits Charlestown, a nabe whose rich history is reflected in beautiful historic homes and public monuments. Beantown’s most famously mis-named landmark, the Bunker Hill Monument, sits atop Charlestown’s Breed’s Hill. The population of Charlestown is experiencing a shift as professionals and college grads mingle in with long-time locals. Nonetheless, the character of the place remains gritty and steeped in a history as thick as the chowder still served at the Warren Tavern.

According to Ben Affleck in The Town, Charlestown is the bank robbery capital of the world, but after exploring this neighborhood many times, I’m a bit skeptical. It’s just so historic, so picturesque, there’s no way that it’s home to that many thieves and criminals. But when it comes to Boston, I guess you never assume too much.

Anyway Charlestown is located on the other side of the river and offers great views of the city skyline and a nice escape from the city bustle. The Freedom Trail runs through here, down to the Charlestown Navy Yard where the U.S.S. Constitution is and over to Bunker Hill. I love it because it’s close to the water and you can grab a book and a seat on a bench and watch the sailboats. There’s also a ferry you can take for $1.70 to the North End, which makes for a fun, cheap date night.

There are some dive bars left over from the pre-gentrification days and are great to hit up at the end of day for some darts and cheap beer. There are families and young professionals and the streets are generally quiet and clean.

Transportation can be tricky, but it’s a short walk to North Station and parking is easier on this side of the river.

I hadn’t visited here until recently: several of my “professional” (still so strange to call them that) friends are choosing Charlestown to both rent and buy because of its great real estate prices right now. When I visited, I knew that real estate was cheap and I sort of figured that it would be a grubby up and coming nabe, as in, it still needed a lot of work. While Charlestown isn’t quite ideal yet, it really is a little paradise. First of all, the buildings have a ton of character. They’re all fairly old and are painted in an array of bright colors that really make the nabe pop. The nabe is also near the harbor, making it just that much more charming.
Even if you aren’t looking for a new nabe to move to, I would definitely visit Charlestown just to see it!

R.I.P. Charlestown of old, and my Dad's Chevy Chavette

My Dad loves to tell the story of the weekend he spent in Charlestown during his college days.
“Your Uncle Richie was livin’ there with a couple’a guys. The rent
was cheap and the place was a dump.”
This is a basic approximation of how the story opens. Stay with me. It gets better.

“I only planned on spending the night—kindof a stoppover on my way from New York to Nova Scotia to go see about a girl. I parked my 1976 Chevy Chavette—with all the clothes I owned in this world, a french press, and a book about piping plovers inside—across the street from Uncle Richie’s front door. Woke up in the morning and my car, along with my every worldly possession was gone. I ended up spending the whole weekend in Charlestown. Things with the Canadian girl didn’t work out.”A lot has changed in Charlestown since that infamous weekend. Its reputation is no longer defined by Irish mobsters like those portrayed in Scorsese’s The Departed, or the organized crime that happened under their direction. Now Charleston is a much safer, (even hipper) place where families can park their minivans on the street without fear while they picnic amidst famous monuments and statues commemorating Revolutionary War battles in Charleston Commons.

Perhaps an even stronger testament to Charlestown’s return to prominence than the decreasing number of car heists, is the fact that Todd English, the big-headed, ever-smirking, but infallibly talented celebrity chef himself, decided to open a restaurant in the Nabe. Its name: Olives. Its game: Fresh, handcrafted, big-headed, and delicious.

Charlestown is full of parks: The Navy Yard and the Commons might be the first that come to mind, but Shipyard Park is not to be missed. Less green, more steel and brick, it’s a skateboarder’s dream (and nightmare. Skateboards are prohibited), and for the egomaniacs among us, it’s a great place for a photo-shoot.

After spending a good deal of time with friends who call this place home, I’m not sure I’d mind trading in my late model Chevy, my crusty old coffee maker, and my Audubon Book collection for the chance to start fresh in the new and improved Charlestown.

Charlestown on the Sea

Charlestown was first founded by the same Puritan cat who later went a bit inland in search of fresh water. He stayed put when he found it (the Charles River) and named this new town: Boston. So it’s a nabe with a rich history that is reflected in beautiful historic homes and public monuments. Beantown’s most famously mis-named landmark, the Bunker Hill Monument, sits atop Charlestown’s Breed’s Hill. Those who live in the pinnacle’s shadows chalk the misnomer up to Breed’s Hill’s lower elevation and closer proximity to the local tavern at the time of its construction.
Charlestown residents, a mix of young professionals and families whose local roots are as deep as the oak trees lining the C-town commons, still flock to their local watering holes for after-work pints and piping hot bowls of clam chowder. The Warren Tavern is one such establishment claiming bragging rights as the oldest tavern in the Commonwealth and serving mugfulls of thick, chunky chowder. This is the stuff of sailor’s/lobstermen’s/college girls’ dreams, and its recipe as secret and un-publishable.
College girls and seamen (that is men who sail the seas, folks) alike will enjoy the history lessons offered at Charlestown’s Naval Yard. A National Historic Park, it is home to the USS Constitution, the oldest commissioned warship afloat in the world. Touring the boat is free, but for a small fee, themed tours are available. Costumes are encouraged. Swinging from the rigging whilst brandishing a harpoon is not.

Charlestown is a pretty amazing nabe. it is home to a diverse range of people, high income and low. There are a few roads that lead in and out of this nabe, making it a strange “island” sandwiched between the river on the north and east, and interstate 93, 99 and train yards and on all other sides. This nabe, which is slowly reclaiming waterfront industrial zones, is a haven for all types of people. Everyone from young artist types, blue collar workers, families, old folks and rich yuppies all call Charlestown home. If you took all of San Francisco and shrunk it down into a three square mile block, then dropped it into the middle of Boston. Charlestown would be the result. It’s got skinny one way streets on steep hills and colorful houses crammed together end to end. Its got old warehouses that have been converted to art galleries and commercial space. Main street and the surrounding streets are beautiful, with wide laid-brick sidewalks that bring you to great restaurants and shopping. This nabe even has high income liberal elite enclaves near the water, just like SF! The east waterfront boasts huge upscale condo developments right to the water. They have access to a marina if your rich enough to have a boat. and there is a great boardwalk. The views from these places is extraordinary, right across the river is the beautiful skyline of Boston. You won’t just find rich folks in this nabe though, on the north-west side there are less extravagant apartment complexes, set back from the water. There is also a large area of small houses and apartments that are all in the center of this nabe. This area is beautiful, and like I said, extremely reminiscent of San Francisco. I couldn’t believe that I was still in Boston on some of these streets. These homes and apartments are perfect for anyone looking to live somewhere with a great neighborhood feel, and still be close to Downtown. There is definitely a family vibe in a lot of this nabe, and it’s all pretty quiet. There are a few great parks for the kids, the one that stands out is Doherty park. It was absolutely packed with kids, all running around enjoying the huge pool, water park, and playgrounds. The parents seemed to be enjoying themselves too, taking advantage of the large open area to spread out a blanket and bask in the sun. The whole atmosphere was topped of by a booming sound system hidden somewhere playing Justin Bieber and other pop hits. Tourists flock to this nabe. On the waterfront there is a Navy shipyard where they allow tours of a huge warship. The Constitution museum is also down there along with a myriad of other “founding fathers-esque” attractions. On Bunker Hill, there is a massive memorial park to remember the revolutionary war “Battle of Bunker Hill.” Complete with a little museum, this park attracts tourists, and locals looking to lay on the spacious grass and relax. Transportation around this area is a bit of a hassle. The nearest T station is the Orange line stop at the Community College on the far west end of the nabe. The Bus services the entire length of Bunker Hill Street and Main Street, which is adequate enough. Parking is a nightmare here. The streets are narrow and always packed and there is not much in the way of parking garages or public parking. Whether you come here to visit, or to live, this nabe is just as charming as San Francisco. It feels isolated, but it’s just a step over the river to the North End of Boston. 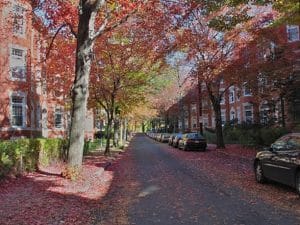 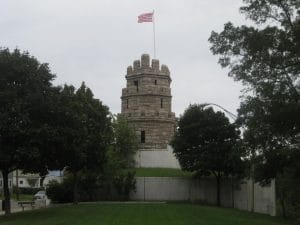