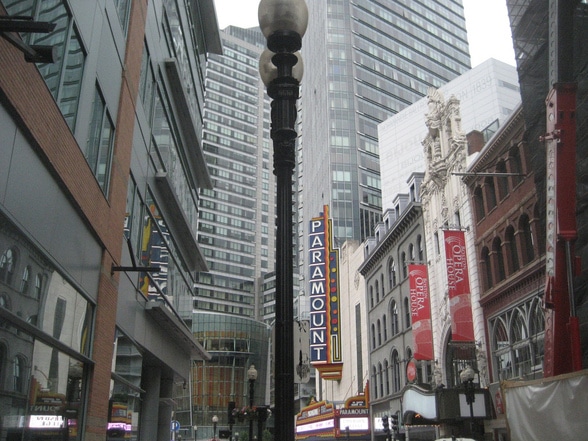 Like any city downtown, it’s a mix of tourists, business professionals and also students from Emerson and Suffolk College. There are some big name clubs and chic restaurants, but I’d rather head to a place further out of the downtown area for eating and drinking. It’s a must-visit area during Christmas when they light the tree in the Boston Common and offer ice skating at the Frog Pond. I dread coming downtown in summer though, when it’s sweltering, packed with tourists on the Freedom Trail and generally claustrophobic. Basically, it’s good for a visit to get yourself familiar with the city or to relax in the gardens, but I don’t know if I would want to live here (although I probably couldn’t afford it anyway).

Fun for a visit!

It’s strange to think of downtown Boston…when one thinks of “downtown,” one usually thinks of a part of a city, that’s, well, downtown. But in Boston’s case it’s more the actual city part. The city itself is pretty small since “Boston” actually spreads out and becomes more rural even though it’s technically still considered a city, very strange I know.
Downtown Boston is definitely the most touristy part of the city but it’s still fun to visit. It has all sorts of really fun weekend activities for those living in Allston, Brighton, Newton, Brookline etc, such as the aquarium and all of the museums. I personally can’t imagine actually living here (plus it’s really expensive) but it’s always a fun adventure to jump on the T and take a trip downtown! Government center often hosts festivals and if you want your fix of making fun of tourists, Faneuil Hall is a must go!

Day and Night in Boston's Downtown

I spent a decent amount of time sweeping around Downtown Boston while visiting a friend at Emerson College—she was living in the dorms at the time. It does seem that the place is a tourist trap, which I can vouch for since I was a tourist. Boston’s downtown has the true hustle bustle aspect of any big city—something that’s exciting but also mildly callous, a place that you walk through and not that you stay in. Downtown’s a totally different scene at night: tourists transform into drunk college-folk traveling about. It starts to feel more like campus then than the financial center of the city. I must send my regards to the few late-night establishments here—NY Pizza was a necessary stop when we were coming home at night.

I lived here for two years while I went to Emerson College. If you’ve ever come here during the school year you’ll know Emerson because of the crazy outfits and cigarette smoke canopy. Living here is extremely expensive because it’s the center of Boston. That being said, everything closes strangely early. The only thing I remember being open is 7/11 and New York Pizza, which used to jack up their prices after midnight to make profit on all the drunk kids stumbling out of cabs near the college, and the older clubbers getting out of Roxy. Suffolk is also nearby.

The Public Garden is really great, beautiful every time of year. If you have an affinity for cobblestones and fountain you’ll like downtown. There’s a lot of places to eat, mostly overpriced of course, but there are some affordable dive bars around. The theater district makes it a busy place to be in the evenings. Newbury street is a great way to spend a day or half day. There are tons of stores and it has the reputation of being the trendy, expensive street of Boston. During the summer it’s a good place to get lunch and people watch, and I always liked walking home at night along the well lit street.

I always felt a little distanced from everyone around downtown, though. I think it’s because most people walking around are visitors, there aren’t really residents unless you get into Chinatown or Beacon Hill.

What comes to mind when you think of a garden? Perfectly manicured foliage amongst sculpted greenery? Of course The Public Garden possesses these necessary qualities but it holds something much more mystical than that. Separated from the Boston Common solely by Charles Street, this picturesque park is tragically underrated. While the Boston Common has 200 more years of history on the Public Garden, this crucial piece of the Emerald Necklace desires it’s own stop along the Freedom Trail. With less activity that it’s neighbor, the Public Garden is nestled in a peaceful, tranquil pocket right in the heart of the city. The stark contrast between such natural beauty and the modernist backdrop of the Financial District makes the serenity that inhabits the area all the more magical. It doesn’t seem possible that such peace could be created in a bustling metropolis and yet it does. If you choose to take a ride around the lake in a Swan Boat, the near silent gliding across the water in the motorless paddleboats makes it easy to see why these have been a tradition for over a 100 years. For a few precious moments in time, all of your focus can be shifted to the pond, the weeping willows, and the swans Romeo and Juliet as the float amongst the vessels made in their liking. It is this sense of calm that touches so many when they visit here, a peace that is not easily captured in our often chaotic days.