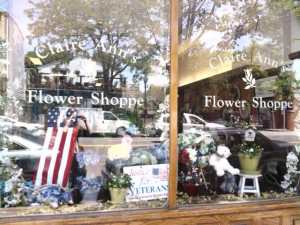 A lifelong City Point resident and owner of Clair Anne’s Flower Shop, Clair tells us about the highlights of City Point.

How much has the neighborhood changed in the past few decades?

It’s unbelievable. When I was your age and I worked at Gillette, they didn’t like South Boston. They thought we were living in the slums. Now those very executives couldn’t afford to come and live here. It’s funny how it turns.

So it’s a positive change.

What do other people think of South Boston?

I think they love it. They can’t get in here fast enough. We don’t have enough apartments for them—everybody loves it! Everyone loves Southie, they all want to move here. That’s what I hear anyway.

It’s good. It’s close to everything, close to downtown. You know I live close to my house, so I don’t have a big commute.

What are some secrets of South Boston?

The beach, but that was a secret until ’76 when the tall ships came in and after that it gradually became more populated. You have people coming in from everywhere. As far as Reading, the North Shore, they come down here just to go to the beach and Castle Island.

What is the best part of the neighborhood to live in? Are there some areas that are nicer than others?

No. When I was younger, there were places that were kept more nicely, but that’s not true anymore. Condos are everywhere, they all over place. Well, Farragut Road, that’s right on the beach. Columbia Road, that’s another beautiful road. Or near the Yacht Club, that’d be a nice place to live.

Is there anything you wish you could change about the neighborhood?

The parking, absolutely. But I don’t think that’s ever gonna change, as long as there are multiple people in apartments renting. I heard they were going to build a parking garage across the street here, but someone put an end to it. That would be nice, because then people could rent parking space. Sometimes I find myself not going out at night because I’ll say, “Oh what time will I get back, it won’t be until 9, I’ll have to walk from the beach in pitch black.”

How does parking work here?

It’s all on the street, it’s all resident parking. Unless you have a garage, which is very rare, or a driveway.

Everything—there’s all kinds of restaurants, there are a few new ones coming soon. I love the beach, walking down around the whole island and having a cheeseburger. And the parks too.

Do you have any advice you would want to give people who are moving here!

Behave yourself! No fires in the backyard. We have new people next to me where I live and they started lighting these pots meant for the beach.