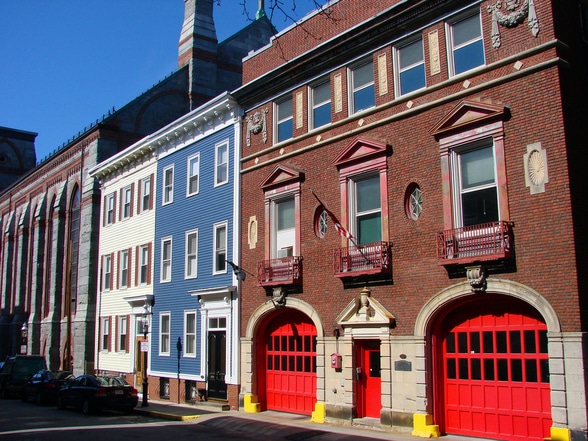 A peninsula to the northeast of Boston proper, Winthrop has miles of coastline that face the ocean, Logan Airport, and East Boston. All of these are accessible through a local bus line and marinas, making this closely-knit, residential nabe a convenient locale for commuters and fishermen alike. The overhead airplane traffic does produce its fair share of sound, but any headaches can easily be relieved with strolls around the Deer Island HarborWalk

A Beach in Boston!

I visited this nabe for the first time this summer because I was desperate for a swim and I was very pleasantly surprised with the little beach I came upon. There’s a wide beach and although one knows the water isn’t the cleanest, it’s a wonderful little mecca right outside of Boston. The airplanes do fly low overhead, leaving behind a big noise but it’s not as loud as I expected and you barely notice the planes after an hour or so. The homes are mostly single family and although they mostly look the same, many of them have little kitschy touches that add character to the little blue collar nabe. Many of the homes are actually on the beach and several of them have kayaks and sailboats in the front “yard” or beach. The nabe seems to have a strong population of retirees although there are some families and there seems to be a very strong sense of community in the little nabe. It’s a very pleasant, blue collar, working class nabe. It doesn’t have a very large commercial area and public transportation isn’t the easiest to maneuver so a car is most essential.

Having grown up in a small Massachusetts town, I understand how communities like Winthrop take heart in keeping the area among the townies. And, let’s be sure, the beaches here are fantastic, but what’s left reminds you it’s not an average small town worth defending from development. The noise pollution from Logan, the city wastewater plant, and a drug rehab clinic are pretty clear indicators that it’s simply a borough with an identity complex.